I still can’t believe it! My second giveaway for Shizzle, Inc lasted two weeks and it was requested by 1,699 people – enough to make it onto the front page of the Goodreads Most Requested list, and even climb up to #24 (there are 30 on the first page). Thank you all who’d entered – especially those who answered my plea on Twitter earlier today, when it was 37 requests or so away from making it to the front page. Amazingly, nearly 300 people requested it today alone.

As promised in the post about the results of the first giveaway, here is the comparison of the two:

I have added a new column to Shizzle Goodreads giveaways spreadsheet, to track how many followers I get – I was not paying attention to that number before, big mistake! I have not filled in the total cost to me – which will be huge, since the winner is in Romania and I have to get the book there within 4-6 weeks.

Also, I had a lot of fun checking my book stats: 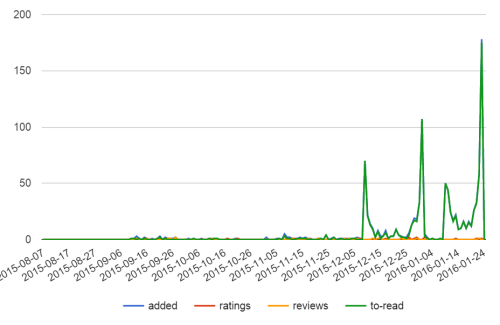 Did you know you can look up this chart for any book on Goodreads? It’s in the top right corner of each book’s page – look for “stats”. Just today, 175 people added it to their “to read” shelves!

So, what did I learn from comparing (ahm, staring at the charts) the two giveaways? My data seems to confirm that:

Another thing I’d learned from looking at other people’s giveaways, that they don’t do one, or even two of those – some of the very popular titles have been on practically constant giveaways. I’m about to schedule another one, and want to test one of the factors – I’m thinking another two weeks, all countries, one copy, but this time unsigned. Does the word “AUTOGRAPHED” have any effect on the numbers?

I will let you know in about three weeks!

36 responses to “Best Goodreads Giveaway yet – #24 on Most Requested list!”