Who can call Mr. Hue a douche now?

I was flipping through the channels today, trying to find anything but the commentary on the US election, when I had a strong deja vu feeling. I went back to Amazon and looked through the 1-star reviews of Shizzle, Inc. until I found its source:

“…the behavior of Mr. Hue was unrealistic and quite frankly, shockingly rude. A complete douche. If this were reality, his company would have gone down in flames before it ever got off the ground.”

Sorry, dear Gloria Louise. Turns out that if Shizzle, Inc. was set in reality, Mr. Hue would now be President-elect of the United States. So what if he spouts dubious business advice, insults people, or fires loyal employees? If anything, he’s not controversial or shocking enough. I mean, these quotes are almost polite when compared to some of the stuff that has come out of Donald Trump’s mouth: 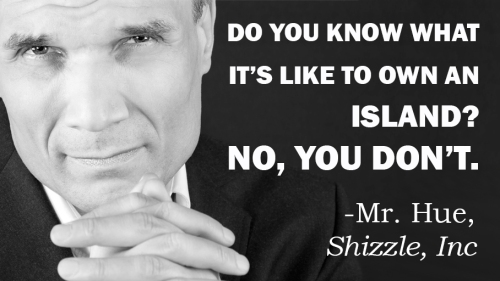 So guess what? I’m gonna bring him back! Somehow, I’m gonna use this recent drama to spin and sell more copies of Shizzle, Inc., because, as one extremely successful man has taught us all, you “can never be too greedy.” Mr. Hue probably won’t be groping anyone or making lewd comments about his own daughter, but maybe he can, I don’t know, call someone “fat and ugly” before firing them, that kind of thing. Maybe he will deport the Japanese instead of merely taking advantage of them. This may anger a lot of people, but what does that matter if I get to push my own agenda and sell more copies of my book? And in any case, who cares what people think about Shizzle, Inc., as long as I “got a young, and beautiful piece of ass.” Sorry to drag you into this, Joshy.

Not sure what I’m gonna do yet, but I have a feeling it’s the perfect time to try the New York agents again.