I quit my job today

That’s right, I’ve sent in my resignation letter. The reason is not to become a full-time writer, but it’s almost as good – I finally got a chance to take a major step up in my career. I will be moving to a different organization to lead a team of twenty people – a whole new level of responsibility, new challenges, and hopefully a whole new chapter of my career.

This couldn’t have come at a better time. Just to think, five weeks ago I was crying myself to sleep, getting ready to have two surgeries just to rule out cancer. It was about that time that in an attempt to distract myself, I’d checked Seek to see if any exciting new jobs were advertised. There was one. A perfect job, in fact. Damn bad timing, wasn’t it? I looked at it again the next day. Two or three times. Damn.

I didn’t have the time or mental power to apply, as those kinds of jobs usually require a multi-page statement addressing key selection criteria. This one was through an executive search agency, so they only asked for a resume and a cover letter. I finally sent in the application, just to stop myself from looking at the job advertisement and obsessively Google-stalking the organization.

Imagine my shock when I got the phone call from the agency on the day between the two surgeries. I was high as a kite on opiates and did my best to sound sober as the agent explained that they would like me to come in for the interview the following week. I explained that I was about to have major surgery and asked for a Skype meeting instead. To my surprise, they agreed. Somehow, I managed the next week in the hospital, came home just in time and spoke with the agent for half an hour over Skype. I could not even sit upright, instead wedged in the corner of the couch, with pillows under knees and elbows, afraid to move. I honestly did not think I had a chance – I had a hard time concentrating even to read a book. I even put my new reading glasses on in an attempt to look more distinguished. Pathetic, I know. The agent was lovely and I enjoyed the chat and the corresponding shot of adrenaline. She hung up, I took off my glasses and went back to watching the endless renovation shows.

Imagine my shock when I got the next phone call – this time I was asked to come into the city for an interview with the panel, including my future boss and a couple of other high-flyers. “Sure,” I said. “I can make it happen.” I had no idea how I would make it happen, as I could not yet walk straight and none of my clothes fit because my abdomen was still swollen. I finally figured out a presentable outfit made of a stretchy dress and a wrap jacket. I took a bunch of pills and forced myself to stand up straight. Straight enough at least. You really can’t tell if you strike a pose: 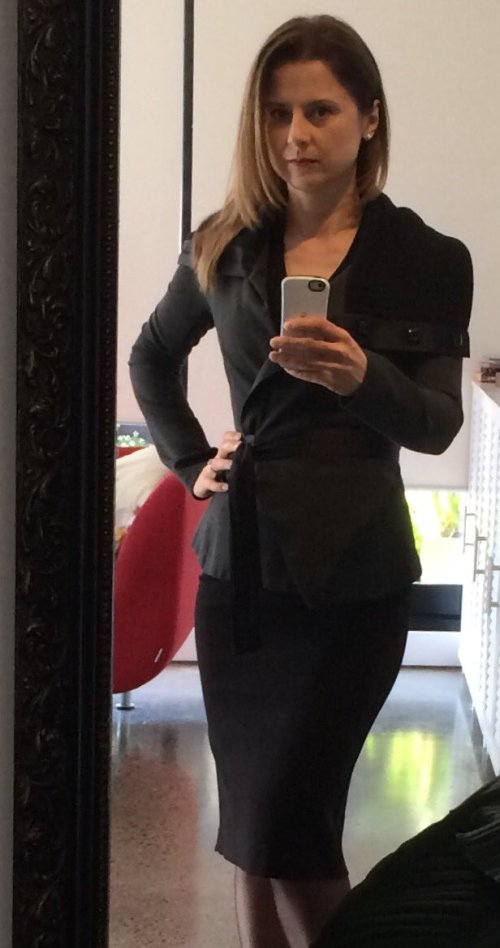 I took a taxi to the city and felt every freaking speedbump and pavement crack with my whole body. It took me ten minutes to compose myself in the lobby and then wobble up the hallway, trying to look cool and nonplussed as I was shown to a chair. I smiled and tried to hide how much effort it was to get into that chair. Funny enough, once I started talking, I felt no pain whatsoever, adrenaline working just as good as tramadol did. I remembered the pain only when I went to stand up at the end of the interview. I barely made it out of the office before I popped a tramadol stashed away in my purse.

Life didn’t stop surprising me there. There was another interview, then the ugly task of asking my manager for a reference, then an even uglier task of quitting the job I’ve loved for four years. It’s all done now, and I can finally relax. I don’t know if it’s the normal healing process or a wave of happiness, but I have had almost no pain today, and a whole week of sick leave left to go.

It has not sunk in yet, that this crazy stunt has paid off. Maybe a little crazy is just what I needed. One thing is for sure, I’m about to have a time of my life with the rescheduled honeymoon in Bali, followed by the new job. There will also be a wedding, although that has not been rescheduled yet. It will be one hell of a firework ending to the crazy year.

A crazy stunt. Maybe that’s what I need to take the writing career off the ground, too. I’ll keep you posted.