Hope your Thanksgiving was great – I didn’t get any turkey down here, in Australia, but Shizzle, Inc did get to #9 on Amazon’s Satire Bestseller list! Not quite the #1 that I was hoping for, but hey! Single digits!

I couldn’t be happier. Not everything went according to the plan, but a negative result is also a result, as scientists say, and you get to benefit from all my experiences, whether good or bad.

To remind you, I was testing three companies over three days, and the results are as follows:

These numbers are quite disappointing, especially when the previous $25 promo with eReader news resulted in 63 sales and covered the cost. It could be that it’s not a good idea to advertise over a major holiday, especially the Black Friday. I might give RR and BG another try, although I’m completely disappointed in Indie Book Promo – I have contacted them and they promised to send me some stats, although their attitude was that they are a different model to an email blast, and that’s just that. Well, I have not seen any evidence that they’ve made a dent on the day or today, so I will take an email blast with results that I can see any day. In the future, I will not bother with any website banner advertisements, seems that a targeted email is the only way to get people to notice.

Back to the numbers. In order to recoup my $100 investment, I should have sold at least 286 copies, so the 68 total sales mean a loss of $76.20. It’s actually a little better than that, because alongside the sales, there’s been a major spike in KENP pages read: 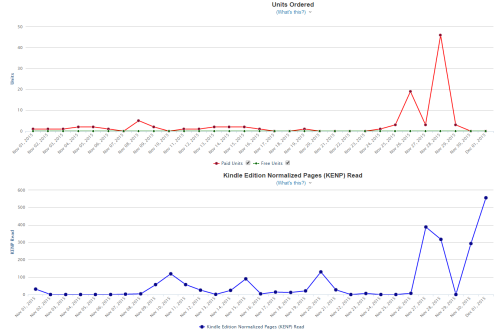 So far it looks like the promo resulted in at least 1,561 extra pages (and hopefully more in the near future!). At roughly half-cent per page, this amounts to another $7.80 or so, so the total loss is currently at $68.40. Hopefully it will continue to reduce as people keep on reading. And if it’s one of you – please, please post a review! I’m up to 18, but it takes 25 reviews to advertise with some of the marketing sites I want to try.

In addition to the three mailouts, I’ve used the blitz as an excuse to continuously report on the sales rank and sales numbers. That resulted in crazy Twitter activity – here are my “impressions” for the week:

Even better – I have gained almost two thousand followers over this past week! The snowball effect is clearly happening, just not so much in sales 🙂

Speaking of all the marketing sites I want to try, have a look at the The Most Super-Duper, Exhaustive, Comprehensive, and Current Listing of Free and Paid Book Advertising Websites and Ideas, which has been updated with even more sites. I have not given up on paid advertising – you are free to draw whatever conclusions you want from my data, but I see it as investing in my brand. The upcoming blitz/full-on war is as follows:

Let’s see what that does! Ka-boom!